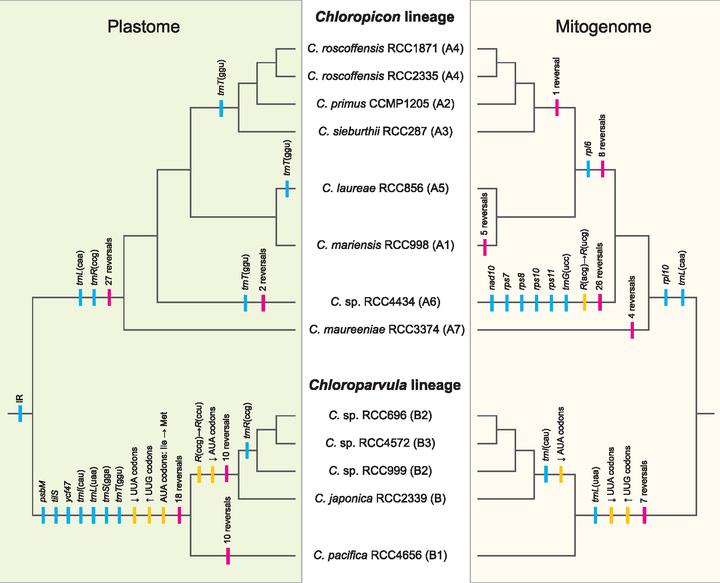 The tiny green algae belonging to the Chloropicophyceae play a key role in marine phytoplankton communities; this newly erected class of prasinophytes comprises two genera (Chloropicon and Chloroparvula) containing each several species. We sequenced the plastomes and mitogenomes of eight Chloropicon and five Chloroparvula species to better delineate the phylogenetic affinities of these taxa and to infer the suite of changes that their organelle genomes sustained during evolution. The relationships resolved in organelle-based phylogenomic trees were essentially congruent with previously reported rRNA trees, and similar evolutionary trends but distinct dynamics were identified for the plastome and mitogenome. Although the plastome sustained considerable changes in gene content and order at the time the two genera split, subsequently it remained stable and maintained a very small size. The mitogenome, however, was remodeled more gradually and showed more fluctuation in size, mainly as a result of expansions/contractions of intergenic regions. Remarkably, the plastome and mitogenome lost a common set of three tRNA genes, with the trnI(cau) and trnL(uaa) losses being accompanied with important variations in codon usage. Unexpectedly, despite the disappearance of trnI(cau) from the plastome in the Chloroparvula lineage, AUA codons (the codons recognized by this gene product) were detected in certain plastid genes. By comparing the sequences of plastid protein-coding genes from chloropicophycean and phylogenetically diverse chlorophyte algae with those of the corresponding predicted proteins, we discovered that the AUA codon was reassigned from isoleucine to methionine in Chloroparvula. This noncanonical genetic code has not previously been uncovered in plastids. 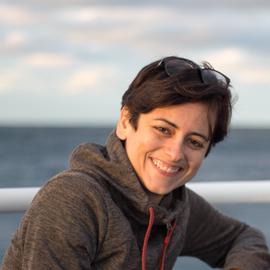